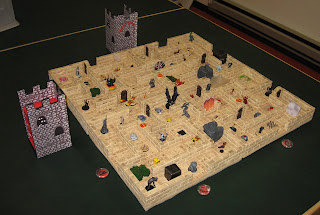 I purchased a set of Hirst Arts molds for making Egyptian terrain for my pulp miniature games. While I was building the sets I realized I could use the floor squares and wall blocks to make a 3D Wiz-War board. I had seen pictures of Wiz-War boards using Legos and Dwarven Forge scenory and I thought those looked pretty cool. I have a Classic set of WizWar that we pull out on game nights for a quick and fun game. The paper boards and markers just don't have that extra something that miniatures do; so why not use the molds I had to build my own. 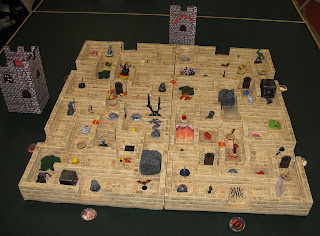 I began by building the basic blocks I would need as I was casting the parts for my pulp terrain, but there the project stalled. I knew I wanted to have it done for Origins 2007,but it just didn't happen. So this past winter I submitted an event for this years Origins and committed myself to finishing the project. A few weeks later Hirst Arts posted their own version of a 3D board. which gave me some more ideas and a final push to finish the project.

Over the next few posts I'll show more detail of this project. So check back often. 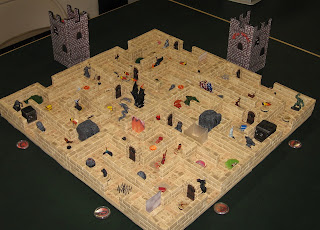 Nice boards. Many years ago I came up with a game called Dungeon Crawl that was based upon WizWar's key concepts. It had different character types and a movement system more like Space Hulk. It was a lot of fun. It is amazing to see all the variations generated from that one simple game! Looks like you have a very nice setup there. Enjoy!