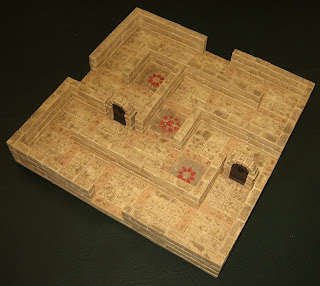 When I began this project, I needed to make two major decisions: would the walls be removable to show damage, and what size should I make the squares. The first took the most thought, planning and experimenting; the second was easy.

The square size was determined by the molds I had purchased from Hirst Arts. Since I already had the floor squares for the Egyptian terrain (#290), I was limited to 1" or 2" square spaces. By using four of the squares to make a space I would have plenty of room to fit monsters and terrain features on a space as well as fit in doors. Plus by using four blocks to make a square I would have a center mark for line-of-sight. I used 1/2" blocks between each floor space to make room for the walls and to use as space dividers. 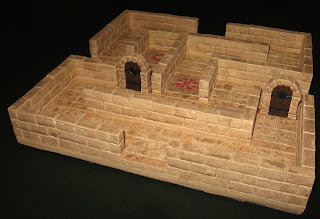 Making the choice of how to show wall damage was a little harder. My first thought was to make each section of wall a removable piece. The difficulty with that method would have been that not only would each piece need to be a self contained wall, but I would need to make small columns between each section of wall to account for the spacers between each floor section. That would have made the board somewhat fragile to transport, which was a major consideration. Now Hirst Arts has molds for half thickness floor bricks that would have allowed me to recess the walls below the floor to make them removable, but when I began this project they weren't available. My next thought was to make an overlay to indicate the destroyed section. I made a u-shaped sleeve out of plasticard to slide over the wall. I then built section of destroyed wall and photographed it from both sides and the top. Then I took the images and pasted them to the sleeve. It didn't look bad, but not quite what I wanted, plus the problem of double thick walls where two boards join. Finally I had some custom "Destroyed" markers made by Litko. I just lay them on the wall - it looks great.
The walls are three bricks high. Since they are glued to the same board that the floor bricks are glued that makes the walls 1 1/2" high - slightly taller than the average miniature. I think it makes for a better dungeon feel than a shorter wall.

The doors that I started with where of an Egyptian look since I already had the molds. It wasn't really a good look for WizWar. But when mold number #282 came out I purchased it and switched all the doors to a more traditional dungeon door. Plus the mold has castings for treasure chests.

I decided to paint the board in sand colors. I could 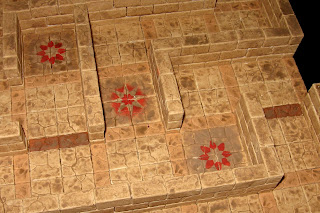 have gone with a more traditional gray, dungeon look, but I find the lighter color makes things easier to see and shows off the minis better. I painted the spaces and and walls one color, the 1/2" blocks between spaces a slightly darker color to help delineate the spaces, and a even darker color on the 1/2" blocks that the doors go on to make set-up easier.

I made stencils for the wizard homes and treasure squares. I then sponge stamping in four different colors. It gives a sort of airbrush design.

The blocks were glued on to 1/2" solid foam (I had a lot left over from building my Egyptian terrain). This makes the board sections very sturdy for transport. As a finally touch I glued matching tan felt to the bottoms of each section. 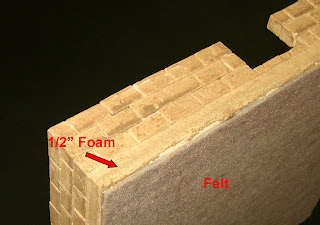 Posted by Chief cook & bottle washer at 6:59 AM