Part of the fun of building this game was in envisioning the different features like Sticks and Stones. There are no images of these in the game itself, only descriptions of what they do. The only pictures of them are generic stones and sticks with a "magic field" around them and a different color to help keep them seperate. Of course, the objects are usually not placed on the board - they don't need a marker unless they are "dropped", and they are most often simply put in the discard pile if they aren't being used. But if I was going to the trouble of building a three dimensional board then I wanted something more than just generic markers for these items.
I began with the stones. Having never sculpted miniatures before I thought that I had better start with simple designs. I decided to go with a basic stone-like look for each. Build them out of green stuff, make them look crude (easy enough). Some of the ideas were easy: like the Brain Stone. Others were hard: what does a Soul Stone look like? I stayed with a gray color sceme, based them on 1" circles, and labeled each.

The Soul Stone was the last one I made. It is actually a Reaper minis remounted to match the rest. The Power Stone is made to look like a battery, the Shadow Stone is a piece of Plasticard painted black to resemble a shadow of a stone and the Shield Stone is also a Reaper miniature shield.
The Speed Stone is of course a winged foot. A brain for the Brain Stone and a doctor's bag for the Health Stone. The Fighter Stone is a D&D mini rebased with green stuff over the legs to look like stone. 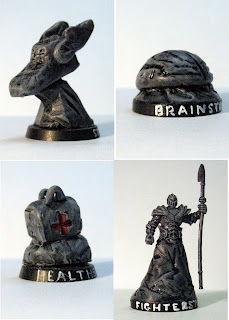 I used an open book for the Spell Stone, an eye-like object on a pedistal for a Vision Stone and the Blood Stone is a volcano shaped rock with blood filled cracks.

Next up: Some sticks.
Posted by Chief cook & bottle washer at 6:20 AM