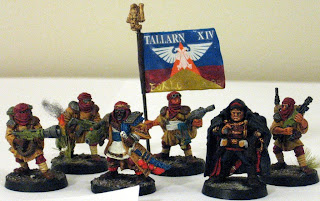 One of my many hobbies is miniature painting. Back in the spring of 1998 I began to assemble a Warhammer 40K army of Imperial Guards. I really liked the looks of the Tallarn units so I decided to create an army based on a Lawrence of Arabia type theme (after all the figures do have a somewhat WW I look to them). I came up with a general plan of how I wanted the army to look with a unified theme of color and markings. I had never done any serious miniature painting before, only an occasional figure for Dungeons & Dragons and I had recently finished some Man O War ships. So I was taking on a large and unknown task. But physics majors are anything but humble and I had just finished building our home so I was ready for a new activity.

Why did I pick 40K? Yes I know there is a love/hate relationship with Games Workshop: the prices are too high, the rule system isn't good, they don't respect their fans/customers; but the figures are really good, and you can always find someone that plays. One of the biggest draw for me (besides the cool figures) was the fact that there was only one game store in town (the next nearest was an hour away) and they had a large and active 40K community. The other plus was that since I owned a game company (it was educational so I didn't carry 40K), I could get the figures at cost. 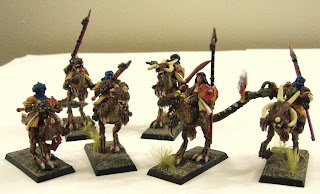 First I planned my army. The key figures would have names taken from Lawrance's life and adventures. The paint scheme would all have a unifying color: desert colors with different colored of head scarves for each platoon and stripes on the vehicles.


I limited my purchases to $30 dollars a month (which went pretty far at cost). The entire project took until the spring of 2006, since I didn't work on it constantly. A major problem that arose was the change from 3rd to 4th edition of the rules. That caused some restructuring of my army and the need to add the brown platoon. They are not Tallarn, but Cadian. I reasoned that they are replacement troops. 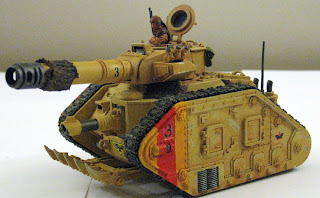 By the time I had finished the army I had come to a realization. I really enjoyed painting and modeling, but I didn't enjoy 40K. I find the universe too dark and game dull. Yes, the game has great potential, just read some of the article in White Dwarf magazine, but unfortunately most of the players just want to slam their armies together and roll the dice. A flanking maneuver is considered high strategy around here. Sure, I had some good games at Origins and other special events I traveled to, but those were few and far between. Plus once the local game store closed there wasn't even the so-so players anymore. I even tried using Star Grunt as a rule system, which is really good, but no one else around here plays it. 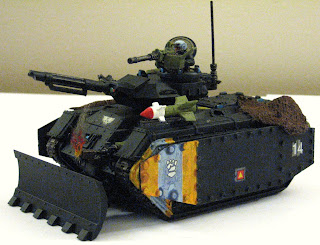 So last year I put my army up for sale. Asking at various game store and the online community I was told that I could expect to sell it for $600 to $800. Yes it was painted nicely and yes it was a large army, but the figures were old and 40K players just wouldn't pay much for it. Well it took my several month to sell it: on ebay and to local gamers, but I was able to sell it for list price of the figures as well as the time and energy spent on it. So for those of you out there thinking about selling miniatures at a price that covers your work it can be done, but it will take a little of your time and energy.

So here are the pictures of my Tallarn 14th.
Posted by Chief cook & bottle washer at 7:08 AM

Long live the fighters of Tallarn !