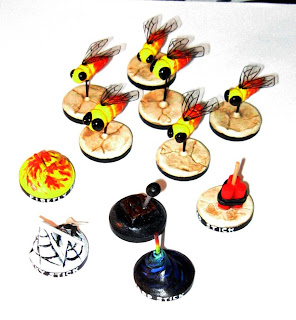 The sticks in Wiz War are magic wands. I could have simply used plain plastic rods on a base with a label to keep them separate on the board, but like the stones I wanted something more dramatic.
They are all based on 1" bases with 1/16" plastic rods to keep them uniform. I used green stuff to mold the features.

The Firefly Stick shows a stick wreathed in flames. I made six fireflies that the stick can cast, out of green stuff with acetate wings.

The Sticky Stick is of course a web with a plastic fly attached. The Warp Stick was made by putting the rod in a mass of green stuff and twirling. I then 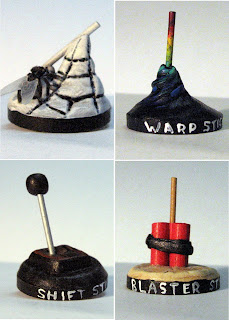 painted it to look like a black hole effect. I modeled the Shift Stick on a car's gear shift. The Blaster Stick uses the wand as a fuse for a cluster of dynamite.

Next: Monsters
Posted by Chief cook & bottle washer at 7:16 AM