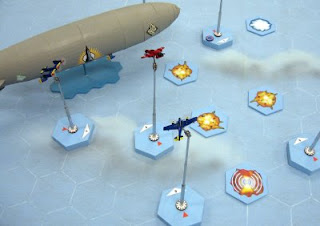 Yes, it has been a while since I last posted. Origins was excellent this year. Lots of friends, lots of games, lots of fun. WizWar went well - I plan to bring it to Origins again next year.
So what have I been doing over the summer? Splitting and stacking wood for winter (we heat by wood and I do it all by hand), canning (a great year for tomatoes and fruit) and homeschooling my daughter (we do lessons all year round). But I've also been working on my next gaming project - Crimson Eagles.
Crimson Eagle is a combination of the old FASA Crimson Skies and the WWI dogfighting game, Canvas Eagles. It's a project I've been working on off and on for the last couple of years, but have finally decided to get serious about it and try to have it done for Origins 2009. 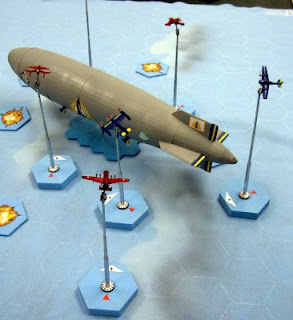 I've had the original Crimson Skies boardgame since it first was released back in the late 90's as well as the PC version and the Wizkid's click version. My favorite has always been the original, though. After discovering Canvas Eagles at Origins several years ago I began wondering if I could combine the two game systems - take the fictitious 2-dimensional boardgame and make it work with a 3-dimensional miniature game based on actual aircraft.

It has not been as easy as it might seem. The Crimson Skies aircraft are closer to WWII planes than WWI. So my first approach was to see it I could make us of some of the WWII versions of Canvas Eagles. Knights Cross has been helpful. I spent a lot of time making mathematical algorithms to try an reconcile the two systems. Luckily there is plenty of statistics on the Crimson Skies' planes in the books and on the PC game's designs system. Ultimately, that proved to be a dead end. The physics of real aircraft is nothing like the made-up world of Crimson Skies, and what I really want is the pulp feel of that fictitious world. So back to the drawing board.
I want to keep the core system based on the Canvas Eagles/ Blue Max game for a number of reasons. First, why reinvent the wheel. Canvas is a well thought out system with years of testing behind it. Second, because Canvas Eagles is free to download it is easy for players to get. So I plan to stay with the basic game and make the changes necessary to bring it into the Crimson Skies' world.
Right now I have it to a point that it is playable. Over the next few months I hope to post the development of the game and a final set of rules. 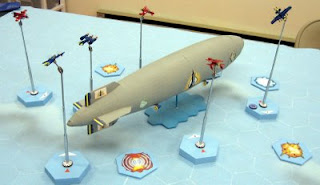