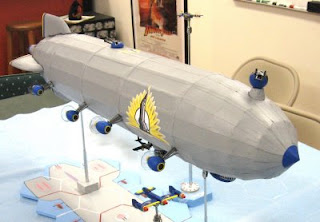 I haven't posted in a while. There are some many projects going on as I get ready for this year's Origins. Since one of the this year's themes is Pulp I have been busy working on Crimson Eagles so that I can run a game of it.

We've been playing it as often as we can and tweaking the rules. One thing I really want is to have a zeppelin in play. I mean, to have a pulp game you really need a zeppelin. The conversions from the original Crimson Skies have not been easy since the zeps don't move in that game, and I really want to be able to have them move. But has finally started to come together. I will be posting the zep rules when I am finished with them.
I have also been working on a miniature of the zeppelin for the game. Now I know that every time someone posts a zeppelin mini they get complaints that it isn't to scale. This isn't to scale for the plane miniatures. It is at least half the scale of the planes. I am well aware of how big zeppelins where. My grandfather was on the flying squad at Goodyear in the 20's and 30's. I was given tours of the Goodyear air dock as a kid, and I even have pieces of the Akron and the Macon. Plus one of my riding toys as a small child was a metal zeppelin that my father rode as a boy. I know about zeppelins.
So here are a few pictures. I post better ones and construction details later.
It is a passenger zeppelin so it doesn't have main guns. There are four anti-aircraft turrets. It is also equipped with a hanger (it you look closely you can see the plane getting ready to launch. 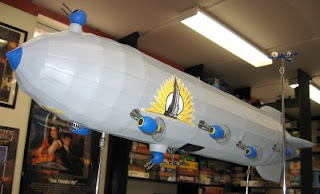 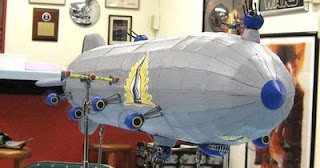 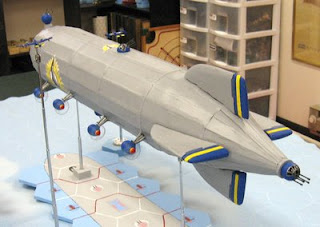