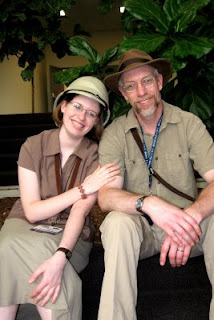 Well it's been a few weeks since Origins ended so I guess I'd better report on my thoughts and experiences before I forget. Over all it was a great time, as usual. In fact I must say it was one of my best Origins yet, and while I don't have the record for attendance by a long shot, this was my 12 year in a row so I am certainly not a newbie.
I've been reading a lot of the reports from other attendees that have already been posted and many of them are filled with the usual complaints of the small attendance, smaller dealer hall, bad food, etc, etc. Yes, attendance was down this year, but over 10,000 does not a small convention make. I'm sure that the economy had something to do with it. But I felt that the gaming energy was up over past years. The people who were there really seemed to be there to play games and have a good time - it seemed like the people who were missing were the fluff gamers; those that come to walk around, hit the dealers hall, maybe play a demo and complain about the convention. There seemed to be more families, women, children, and just a nice cross section of gamers. I took a teenage friend down for one day and he seemed to feel that the girls were cuter this year too. My family and I saw a lot of old friends, made some new ones, and saw a lot of smiles.
The dealers hall was a lot of fun. A number of companies had smaller booths this year (a way to save money), but there where more vendors. And it was nice to see so many little companies. I can find Wizard of the Coast products everywhere as well as Fantasy Flight and the other biggies. It's nice to be able to look at Z-man, Asmodee, Griffon Games, Hero Games, Pinnacle, and Gamescience; as well as Out of the Box, Looney Labs, and Kenzer Co. It was also nice that so many of the companies had new products to show for Origins rather than waiting for GenCon. In fact several of the vendors were apologetic about not have a product available until GenCon - not a case of wanting that to be the premier, but rather production difficulties. It's nice that so many of the companies are realizing that the overlap of convention goers is not that great between Origins and GenCon, and that Origins money is just as good as GenCons. Of course we spent way to much money, as we always do, but we try to support the vendors that come to the show as well as we can - and the teacher's discounts were great this year.
The food was fantastic as aways. Of course we make a point of eating at the North Market during the day (cheaper and actually closer than the food court at the convention center), and Max and Erma's at night.

I only had a chance to play in two games this year. The new Hack Master Basic on Wednesday 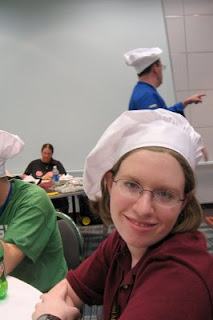 morning and the Iron GM on Saturday night. Hack Master wasn't as good as I was hoping. Part of the problem was that it was the first event slot for it of the con, and the GM wasn't really ready. Another problem with it was that they wanted everyone to try out the new character creation rules, so instead of having pre-gen character we all spent half of the event rolling up characters without rulebooks and with GM's who didn't really know the new rule system yet. The Iron GM tournament was run by Amorphous Blob and used the Savage World system two of my favorite game combinations. The concept was based on the Iron Chef with the GM's creating the adventure from ingredients pulled from fortune cookies; everyone also wore chef's hats. If you enjoy role playing and have the chance you should play and Amorphous Blob game - they are lots of fun. This was the first time my 17 year old daughter has wanted to play a late night game. 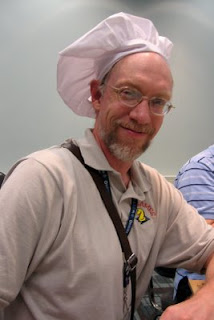 She is usually a day person, but since she had to work most of week and missed so much of Origins she decided to stay up and play. It was also the first time she's done lots of caffeine - mocha espresso and chocolate covered espresso beans; an interesting combination. The only disappointment were our fellow players. Three of the players would probably have been pretty good, but they had been playing too much and were showing the effects of four days of convention. The fourth player was the real problem of the game. A new member of the Amorphous Blob team, he was not GMing that night so he could play. A big mistake. I have a lot of respect for Amorphous Blob, but they need to rethink their choice of there newest member. I have played and GMed RPG's for over 30 years and my daughter has played them most of her life. We always try to work with the group, but this is the first time I have ever tried to kill off a fellow player, and not just once but several times. My daughter too. Unfortunately, we kept failing, including critical fumbles. But overall it was a fun game.

The events I ran went very well. It was a nice surprise to look in the program book and find that three of my four events were featured events. I'm sorry that I could only run each event only once. Many people kept coming up and asking if I would be running them again. That is one of the difficulties of having a very small car and running games that are so large. The only way to run them was to load up a game, come down for the day, and then pack it up and bring the next one down the following day. 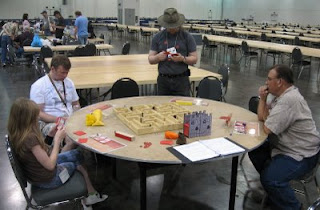 WizWar was run on Wednesday and was as crazy as usual. It was won by a 13 year old girl. She reminded me of my own daughter at that age - raised by a gaming dad, with a quick grasp of a game and a sneaky streak. The first player she eliminated was her own father, and then she snuck in a victory before the other two players could even get to her. 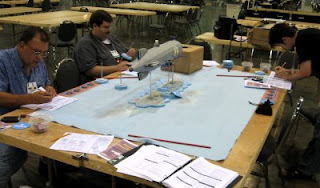 Thursday was Crimson Eagles, my 3D version of Crimson Skies. Not as well as attended as I was hoping for - I'll plan to run it on Friday or Saturday next year since those seem to be the big miniature event days. But it was a fun game. I gave the players the choice of playing a classic dog fight or working as a team to shoot down a zeppelin. Of course they opted for going after the Zep. It worked pretty well with the zep shooting down two planes and the rest of the planes shooting up the zep well enough to board it.

On Friday I ran my .45 Adventure, Temple of the Warriors. The scenario was based on the opening 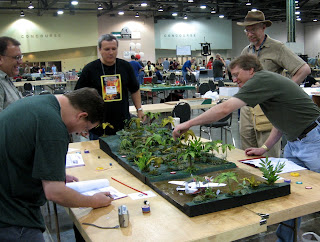 of Raiders of the Lost Ark - with a few twists of course. A fun report by one of the players can be read here. It was a close run game with an ending that I was not expecting - the idol was lost to the bottom of the river. 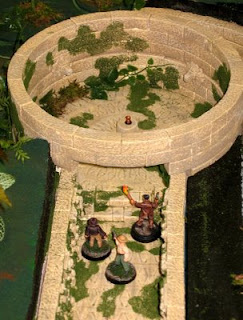 Saturday morning my wife, daughter and I presented our seminar on using games in an educational setting. This was the second year that we have done this lecture and it has been popular both times. The only difficulty was the lack of the promised Powerpoint projector, but we managed. The Origins team even made copies of the Powerpoint as handouts for the attendees. 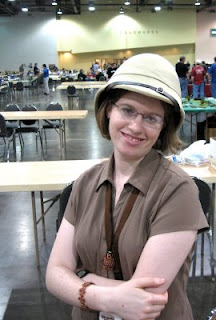 The rest of the con was great. Registration was smooth as usual. I brought both my friend down and my 10 year old nephew (his first time) with day passes. My friend upgrade his to a regular pass later in the day so he could play games. We can't wait till next year. 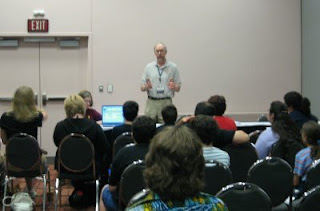