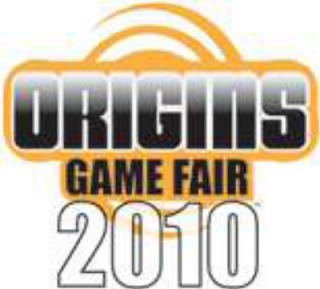 I just submitted my events for Origins 2010. I've been a bit concerned about Origins this year since their website has been undergoing redesign since November with no end in site. I just hope the wait doesn't hurt attendance too much. Origins is a great convention, especially for game playing. It is a bit sad to see the constant fight between so many GenCon VS Origins attendees. These are both great conventions, each with it's own flavor. As gamers we need to support them both, not bad mouth one or the other, since they both help keep our hobby alive. The more game conventions the better. But enough preaching.

Once again I will be taking my 3D WizWar. I'm 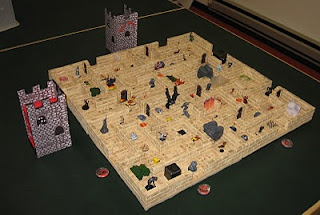 planning on running it twice this year instead of just once. It's always popular and the board just attracts an audience. A few repairs on the traveling damage from last year and it's ready to go. 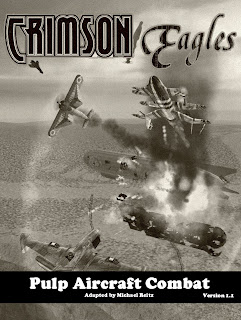 Crimson Eagles will be back again, though this time I'm going to try a Friday time slot to see if attendance is better. It's also ready to go.
I've decided to run Star Fleet Battle Manual after a break of many years. I used to demo this for Lou Zocchi and his Gamescience company. Even though this is a 30 year old game there are still old gamers out there 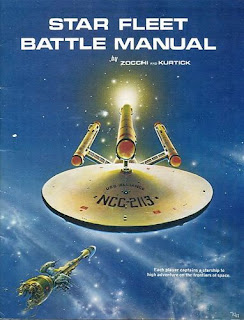 who have fond memories of it and love to playing it. For those of you who don't know what Star Fleet Battle Manual is, it is the original Star Trek miniature game. Many gamers confuse it with the far more popular Star Fleet Battles. The Star Fleet Battle Manual is played without a board using a ruler to move the ships. Combat is done by figuring the angle and distance to the target by the eyeball method and then stretching out a string to see if you hit the target. While the game is simple compared to most other starship combat games it has a clean elegance that has much more of the Star Trek feel than the other games - no attack shuttles, missiles, fighters, and weapons systems galore. Just phasers, photon torpedoes, disruptors and plasma bolts. The game truly captures the feel of the original series combat. 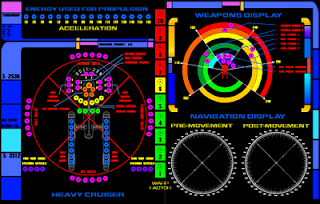 I'm updating Lou's original design with a combat board system rather than the old paper records. Not only will this be more colorful (always a crowd pleaser at a gaming con), but will make record keeping quicker and teaching the game to newbies should be easier. There will still be a need for record keeping for navigation, but I am updating the record sheets for that part too. There have been a lot of changes in gaming since 1973, especially in the area of home computers and self-publishing which were not available to Lou (plus he hates to use computers). The Star Fleet Battle Manual was done on a typewriter with hand drawn graphics.

I am also running it as a tournament. According to Lou there has never been a Star Fleet Battle Manual tournament (at least not an official one, or one that he knows of.) So this will be the first, official Intergalactic Star Fleet Battle Manual Tournament.
Once again my family will be presenting our seminar on using games in education. This has been very popular the last two years, but I have had requests to move it to an afternoon slot. So we will see how that works for it.

Since the .45 Adventure based on the opening scene of Raiders of the Lost Arks did so well last summer I will be running a sort of sequel - the battle at the flying wing. So my big project over the next few months will be to construct a mini of the German Flying Wing from that scene. I'll keep you up to date on its progress. 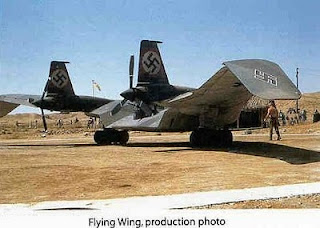 Well, that's it for now. I need to work on some minis. Hope to see many of you at Origins this year.
Posted by Chief cook & bottle washer at 6:24 PM No comments: 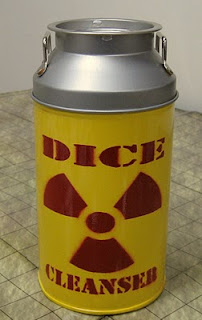 For Christmas 2008, I received a container of gourmet hot chocolate in my stocking. The hot chocolate was ok, but what really intrigued me was the metal tin it came in. After all, as a gamer and a miniature builder packaging is often the best part of a gift since it can be turned into so many useful items: rocks, crashed spacecraft, ruins, and parts of larger projects. This item was no exception - a roughly 10-inch metal container shaped like a milkcan but bearing a striking resemblance to some of the radioactive storage containers I had used in college nuclear physics. Perfect. But what to turn it into?
After some thought I came up with the idea of a dice cleanser. As a long time gamer I have heard more than my share of dice superstitions, both serious and in fun. My players had been complaining for some time that I, as their GM had been cursing their dice. So I decided the time was right to build a dice cleanser.
As a scientist I went about the process in a very scientific way. The thoughts and studies that went 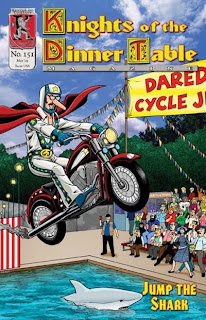 into its construction are best found in article, Dice Cleansing 101 in Knights of the Dinner Table which I wrote after I had completed the cleanser.
It actually began very simply. I decided to paint the can as a radioactive container in yellow and red and then place a piece of a summer camp cabin that I had lying about. The story behind this piece of wood goes back to my college days when I spent my summers as a camp counselor. The cabin was where the male summer staff that were not counseling stayed - lifeguards, kitchen staff, maintenance and counselors that weren't with kids. Most of us were gamers and many of us still game together after almost 30 years - a feat in itself. When Cabin #1 was torn down several years ago I was able to save a piece of it, so I thought that it would be appropriate to be in the cleanser.
I also thought that autographs of people who work in the game industry would also be a nice touch. So I wrote a letter to my friend Lou Zocchi asking for his. For those of you who don't know Lou, you might say that he is the father of the modern polyhedral gaming dice. To learn more about Lou and his dice check out his YouTube video. He and I have known each other for years so I should have known that I would get more than his autograph. What I got was a small package with some very odd dice and a letter explaining that these were Magic Bubble Dice. Lou went on to explain how these might be able to suck out the bad luck of a die. Well, these certainly had to go in the can!
From there the whole project just sort of snowballed: the piece of Cabin #1, autographs, Magic Bubble Dice, a dice monitor, and pictures of dice torture to strike fear into poorly rolling dice. And then, of course, I decided to write an article on the theory of dice cleansing and how to make a cleanser.
For those of you who are inspired to make your own cleanser I am posting the pictures of dice torture for you to print out and place in your own cleanser. (These are only staged - no dice were actually harmed in the making of them.)