As you can see from some of my previous posts I really enjoy the Colonial Battlefleet rules by Steel Dreadnought Games; especially the Man Versus Machine expansion. The only problem I have with it is the ceiling on ship designs.

It isn't really a problem. The game is designed to prevent unbalance designs and play, as well as the power creep that happens in many game systems. The difficulty is purely one of aesthetics - as I have been collecting ships for my fleet I have been purchasing larger and large models. The Titanstars and super heavy battlestars look really cool. Now I could simply stay within the game rules and design my ships to fit the system, but it just doesn't look right.
The design for the Galactica has a game mass of 723/1000, a hull size of 85/100 and is size 4. 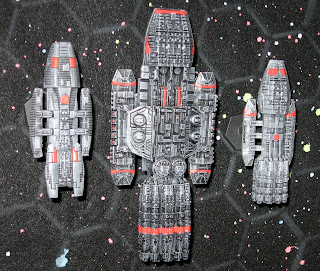 The design for the Pegasus has a game mass of 884/1000, a hull size of 94/100 and is a size 5. These work perfectly fine. They are great designs. But look at the image of Hanger 18's Titanstar Kronus in comparison; the Galactica is only slightly longer than the Kronus' hanger bay. If I stay withing the design limits of the game it can have a maximum mass of 1000, a hull of 100 and a size 5.
True, these large ships are certainly not cannon to the Battlestar Galactica universe, and might even break the spirit of that universe. But science fiction gamers have never been able to resist really big ships - and just look at what is out there in fan fiction and the minis being made by Ravenstar and Hanger 18 to name a few.
When I began collecting my fleet I wanted the ships to use designs that matched their size in comparison to each other. So I weighed each one on my scientific balance (the advantages of being a physicist with a home lab - useful equipment), and then set up a graph with where their mass fell in comparison to game mass. (I used the Parthenon/Pegasus and the Acropolis/Galactica to set my baseline.) As I purchased 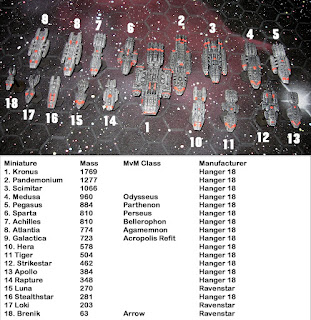 new minis I was able to find their game size by weighing them and checking the graph.
Of course the weight of a resin miniature isn't a real comparison - in reality a smaller ship could out weigh a larger vessel - hanger bays would probably take up less mass than engines for instance. But it seems to work - the designs match how the minis look in comparison to each other.
Until I purchased Hanger 18's Pandamonium and Kronus. These minis are huge in relation to the rest of my fleet; falling well outside the ranges in the rules.
So I took the data from the ship design rules, determined the formulas that were used for the different design aspects and built my ships to match the rest of the fleet. Do these designs break the system? Probably not. The critical formulas for Delta/Points and Armor/Points are both quadratic so as the size of the ships go up the expense really climbs. Smaller ships which work with the system as given are more cost effective, and can actually bring more fighters and weapons to the table at a lower cost. Plus most scenarios won't work well with really large ships. But it's fun for field these.
Posted by Chief cook & bottle washer at 9:08 AM