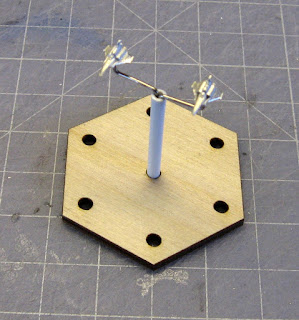 As I said in my last post I would explain the bases I use for my fighters and missiles. Having played space combat games for over 30 years now I've had a lot of experience in using different systems - everything from cardboard chits, paper records, individual minis for each fighter, and the current popular method of using a die to represent a squadron of fighters. Each has its advantage and disadvantage.

My group has been using the die method, but it does have its draw backs. One is that unless the stand has a place to hold the die, then often when you move the stand the die gets left behind in large fleet actions. Or if the die is on the stand a careless bump can cause it to tumble off to a different number. Then there is the time involved in changing the die to a new face after damage is taken. And even though we are all experienced gamers, and use different dice for rolling in the game, it is amazing how many times someone rolls the fighter die.

Yes, there are professionally made fighter stands with holders for the die that solves many of the problems. Still they don't solve the need to change the die face, and then there is the expense.
I wanted three things for my bases: Simple, visual, and cheap (more money for minis). Removing pegs to show damage is easier and less fiddly than picking up a 6mm die, changing its face, and putting it back down on the base. Bright colored pegs make it very clear how many fighters or missiles are in a stand from across the table. And as for the expense, each stand with base, pegs, and post cost less than a $1.00. Of course I have the advantage of being a physicist and a woodworker so I have access to a full shop - your expenses may be higher. 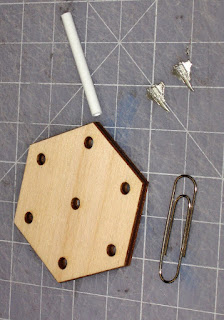 play on 2" hexes so my bases are 1 3/4" across, laser cut from 1/8" plywood; though my next batch will probably be Masonite or MDF. The holes are 1/8" diameter for the pegs and post.

For the fighters I use two minis to represent a squadron - it's just a visual choice. They are mounted on paperclips (easy to bend), and set in a 1/8" plastic tube. The missiles are mounted on 1/8" dowels.

Another advantage to this design is that I can easily store the minis since the posts just set in the base and can be removed; and changed out for different squadrons or missiles.
I am very happy with how they work. Especially for Colonial Battlefleet.
Posted by Chief cook & bottle washer at 4:03 PM