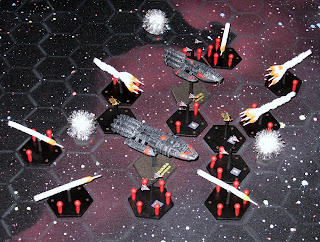 My gaming group really enjoys Colonial Battlefleet by Steel Dreadnought Games. In fact we just finished playtesting the rules for the upcoming Empire Space expansion. Man VS Machine is our favorite rules expansion though.

I have been adding to my Colonial Fleet for the past few months with ships from Hangar 18 FASA and Ravenstar Studios, plus fighter from Studio Bergstrom. One of my favorite parts of miniature wargaming is accessorizing. Not content to just paint the ship minis I have also made ship record cards based on the LCAR screens from Star Trek, paper base covers, minis for missiles and grapeshot , condition markers, and fighter stands.

The photo shows a few of the capital ships with their base covers, fighters on their stands, missiles and cluster missiles, and grapeshot.

The missiles are made from chenille (pipe cleaners), the ends melted over a flame and painted. I've seen these on a number of sites, but never the cluster missiles which a made by twisting five together. I use different colored exhausted for the different teams.

Grapeshot are made from metallic pompoms (1") available from most craft stores. Mounted on a flight stand with a red mark to show their direction of travel.

The fighters are mounted on my new bases with I just switched to. The missiles are also. I'll go into more depth on how and why of these in a later post.

I also have Helpless and Activated stands. Colonial Battlefleet comes with helpless markers you can print out, but I prefer an upright marker for ease of picking up from the board. The activated markers are to put next to fighters and missiles during their move phases. In large battles we've often found we lose track of which fighter or missile stand has been moved, so we place a marker next to one that has been moved until we finish moving our units and then take them up. It really helps.

You could use Battleship pegs for a smaller profile.

Yes I want to see more on the new bases. You cut them or where did you get them from?

The original plan was to use Battleship pegs, but I use more than are in a game and I have access to pegs in various colors.