After almost 20 years Lou Zocchi's Star Fleet Battle Manual will be getting an update. First published in 1972 as the Star Trek Battle Manual (you can imagine how long that title lasted), then reissued in 1977, with an update and revised edition in 1993. Easily confused with the more widely know Star Fleet Battles (which Lou helped to get published), it has a much different feel - instead of playing on hex board you actually move the miniatures and shot by trying to hit the target with your weapons by estimating the angle and then stretching a sting to see if you hit. 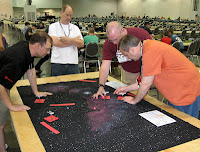 I purchased my first copy in 1978 at a Star Trek convention in Cleveland, Ohio (I was in 8th grade and attending my first con). Many a Saturday afternoon was spent chasing Klingon (or K-Type in the game) vessels around the house with my friends. 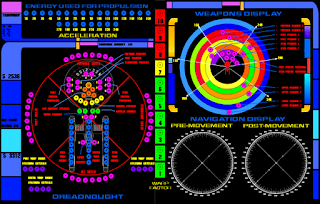 About 20 years ago I began demoing the game for Lou at various conventions including Origins. Two years ago we had the first Star Fleet Battle Manual tournament. (I was amazed that after all the years the game had been around Lou had never had an official tournament.) Over the years I have made updates to the game: improved star ship logs, and of course the energy allocation/damage boards. Every year I have suggested that Lou update the game - reset the type (it is still in the original hand type format), add graphics, and update the rules to include the changes we have made over the last 20 years.

Finally, Lou has agreed to allow me to bring the game into the 21st century. The biggest obsticale was in dealing with his fears of online pirating. (Lou still refuses to use a computer.). After showing him the sites with pirated copies of his game that are already up, and convincing him that at least if the game is offered on RPGNow or other sites he will make some money, he agreed. 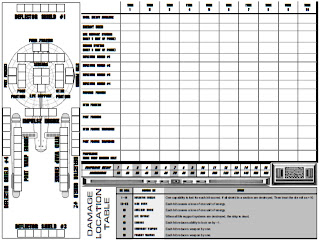 So be looking for a new copy of this old favorite in the next year.
Posted by Chief cook & bottle washer at 4:22 PM

I had this game years ago. Loved it. Have you guys got this game out yet?