Victory In the Pacific 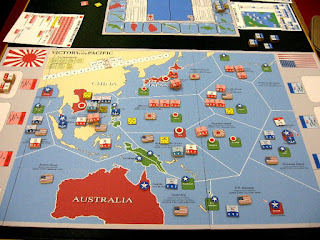 Many years ago, when I was fairly new to gaming, I received Avalon Hill's Victory In the Pacific for Christmas. It quickly became a favorite with our gaming group. Over the years it still comes out.

Recently as I was looking for a campaign system for Naval Thunder by Steel Dreadnought games I dug out VIP again. Looking on boardgamegeek.com I was inspired to update the board and pieces since the original look has not aged well. 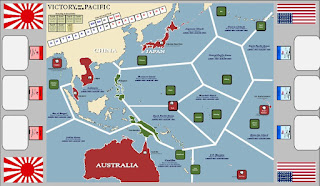 After redesigning the board (I scanned my original board, then recolored and sized it) I decided to attach fleet areas to each side. Even though the board is much larger than the original (48" X 28" versus 28 X 22) it can get crowded with pieces. So each side has three fleet areas to put groups of ships with corresponding markers. 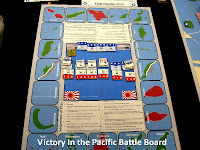 I also made a battle board to move units to for conducting combat. Around the edge I placed space for putting units at are in the various ports.

The pieces are mounted on 1/8" wooden tiles. The large pieces are 1.25" square, and the smaller ones are 1" square. These are larger than the original, which makes reading them much easier. I found actual silhouettes of the ships and then re-scaled them so that they would all be sized appropriately to each other.

I made several new markers which were not in the original game. A Battle tile to place in the sea area that combat on the battle board is fighting. Resting on the Bottom markers, Night/Day Action tiles to indicate a players choice of battle, and In Port markers to show that ships are being kept on the battle board areas. 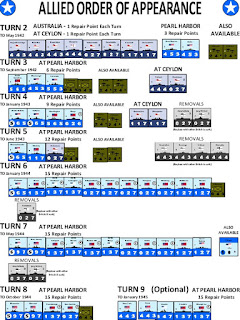 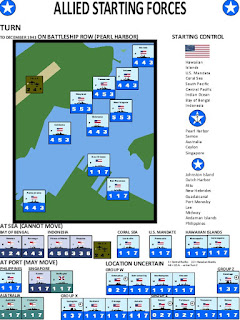 The Order of Appearance charts in the original rules can often be difficult to view, so I made colored ones with images of my new markers on them. The first turn sheet for the Allies has a diagram of Pearl Harbor just for fun.

I have been pleased with how it turned out. I makes a classic game even more fun.