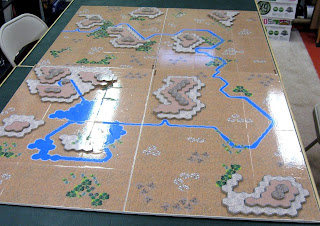 One of my gaming project this past winter was to build a set of modular battleboards to use with Strike Legion by Legionnaire Games. What I wanted was a set of boards similar to the maps I used to play on for Renegade Legion: Centurion by FASA. I originally planned to use these for teaching miniature gaming at the Strategy Camp I ran this past summer, but there wasn't enough time to play it during the week.

The idea was to have boards which gave the feel of miniature terrain, but would be easier to travel with. I wanted something that could be used to teach the use of elevation and cover, but more visually dynamic than just a map. 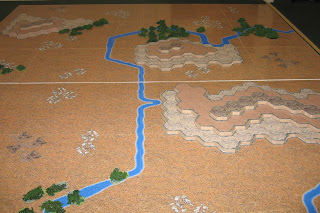 I used HeavyMetal Map to generate maps based on the Renegade Legion maps. These were excellent in their modular design and size. Each board is 2'X3' and printed without the hexes so they work well for miniatures. They are mounted on 1/4" MDF board for durability and are not to heavy for transport. Each level of elevation was cut out and mounted on an other layer of MDF. The maps are also laminated. The trees are made from model railroad lichen that has been soaked in a glue mixture. These can be moved for placement of miniatures, but add a nice visual effect. 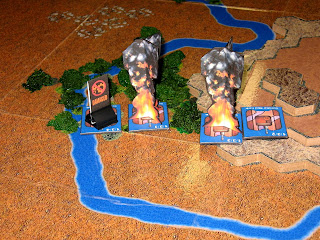 Since I design this terrain with teaching new gamers in mind I use cardboard chits for the units, though I could just as easily use 6mm miniatures. I also made the brewed up markers out of paper (using the explosion markers from the Battle Pack from World Works Games). 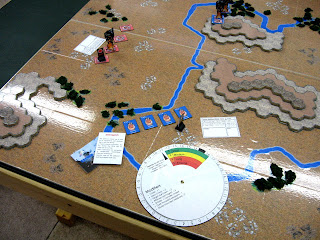 To make it easier for the kids I also made a set of action cards so they could remember what actions are available and how they work. Plus cardboard condition markers like overwatch and immobilized.  A To-Hit wheel lets them quickly figure the die roll needed to each target as well as different ranges. And just for the fun of it I made a paper tactical nuke marker. 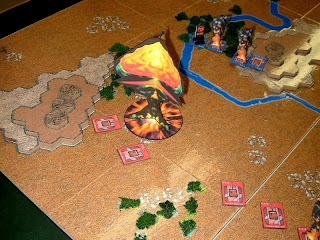 All in all they turned out well and I hope to use them for next year.
Posted by Chief cook & bottle washer at 9:32 AM