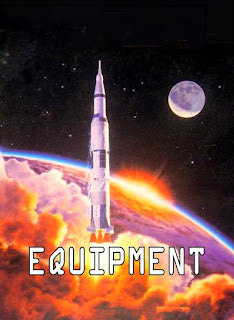 Next up for my deluxe version of Liftoff! are my equipment cards. At this point I only card sets for three players: American, Russian, and Sci Fi. The original game has Americans, Russians, European Space Agency, and China. The US and USSR were fairly easy to find images for since these were the two nations that actually took part in the space race. True, not all of the images I used are the actual piece of equipment, but I tried to keep with what was or might have been available at the time.

China and Europe were a different story since they didn't have much of a space program at the time. Even now there are no lunar landers or shuttles for them.

So for the third player I went with imaginary vehicles. At first I tried to use equipment from movies that were made around the time of the space race. Unfortunately most of the image quality was inconsistent, or the vehicles were to advanced. If a movie or television show was set during the space race the equipment was usually based on US spacecraft. What I did was capture images from Kerbal Space Program. The spacecraft you see on these cards are ones I constructed and then flew. They make for a consistent set of images for this space program.

The Simulator cards are ones I have added to the game. They are something that I thought was missing, that actually played an important role in the space program.

As with my Event cards, these have been reduced in size and resolution from my original ones so that the file is not too large. On these you will notice some odd borders. I had mine professionally printed, so the edges were trimmed.

These cards can be found here. Have fun.