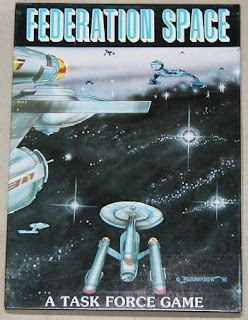 Back in the 1980's my friends and I spent many hours playing Task Force Game's Federation Space. It was not a great game, even then, but we still enjoyed it. The game was simple way to fight galaxy spanning battles in the Star Trek universe. True, the game was weighted in favor of the Federation forces, but it just made it that more challenging to the Klingon and Romulan players.

Lately I have been missing the type of game Federation Space filled - large scale strategic space combat, simple rules, short playing time, and set in the Star Trek universe. Federation and the Empire (the replacement for Federation Space), doesn't interest me or seem to truly fill the void.

One of my new hobbies has been taking older games that I enjoy and updating them with new graphics, boards, pieces and rules. (see my Victory In the Pacific and Liftoff!).  Since I am currently not working on the Star Fleet Battle Manual update, until Lou Zocchi decides to allow it to be published online, I have been making a new version of Federation Space - sort of.

﻿﻿ ﻿﻿
It is only Federation Space in the fact that it is a strategic combat game set in the Star Trek universe, using a simple combat system with a quick playing time. I decided to set it in FASA's Star Trek universe rather than Star Fleet Battles'. I have always felt that that has a more Star Trek feel, especially without the carriers, attack shuttles, and missiles. I have also liked that ship designs from FASA better.

For the basic combat system I chose to base it on War At Sea/ Victory In the Pacific; a clean and proven system that I am familiar with. The map is also based on that system. I added an economic and construction system similar to Axis & Allies (an other simple and proven system), since I didn't want to go with a predetermined fleet build up. Of course there are additions that make it Star Trek - cloaking device, the use of scouts, fleet repair docks, and Orion pirates.
﻿ ﻿

The game is set for a maximum of 10 turns, with the possibility of the Organians returning early and ending the game - making victory a changing factor. Each turn represents six months with technology advances happening by way of improved ship models becoming available.

Right now I am in the process of finishing up the graphics and working on balance. I'll keep you updated on the progress.
Posted by Chief cook & bottle washer at 3:48 PM

Very awesome. I don't suppose there's any chance of getting a copy, someday?

Yes, I will make it available once I finish it.

Huge fan of the original Federation Space and Victory in the Pacific. Your version looks great. Do you have a timeframe as to when it will be available?

I have been working on it off and on for the past few months. With all the regular summer activities plus getting ready for the fall convention season (producing products, developing new ones, and writing RPG's to showcase my line) I have fallen a bit behind. I am hoping to have it ready this winter.

I am not really concerned about copyrights since this is for my own personal use. If I was going to try and market it licensing might be an issue with Paramount. There would not be an issue with ADB - the mechanics are different than their original game, the star map is based on Franz Joseph's design and the Star Trek map set, the ships are from FASA's Star Trek universe (much more like Star Trek was, ie no missiles, attack shuttles, etc.), and the title is a working one only.