I want to thank all of you who spoke to Lou Zocchi at Origins and GenCon this summer about his Star Fleet Battle Manual. I received a call from him after the conventions telling me how many people had asked about the game. He didn't realize that there was that much interest still in it. He then asked me how soon I could have the new edition ready for print.

So I am back on task of writing up the 3rd edition with the updated rules and new lay out. The only difficulty is that Lou only wants do a hard copy of the game. He is still afraid of pirating and believes that only way to keep the game safe is not to do an electronic copy. He keeps forgetting that the game is currently only (legally) available in his original print edition as a hard copy. The edition that I have been working on is designed to take advantage of the current electronic publishing capabilities - with full color photos/graphic examples of play, color playing aids, and color diagrams for ease of understanding; as well as large font and increased page count. Knowing Lou's frugal (cheap) nature I am not sure he will go for the final product in its current form. I have a feeling I am in for a long and frustrating struggle. Hopefully we will see a new addition in time for Origins 2014. 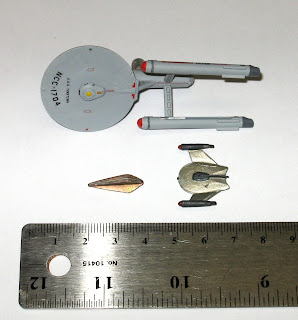 And in regards to SFBM here is an image of some of the original miniatures Lou had for the game. The Federation Heavy Cruiser is one of his plastic models that is still available. The Romulan Warbird and Tholian Patrol Craft are what we can't find -these minis are the only two we still have. Lou did not make these, but only resold them. I purchased the pair from him back in the late 70's/ early 80's. He no longer carries these particular models, but resells larger one from Amarillo Design Bureau. He doesn't remember who produced these. I believe that the Romulan is a Snipe frigate that is still available, but I can't seem to locate the small Tholian. These ships are much more in scale with the original McMaster's plans for these ships from the time that Lou designed the original game and fit his ship cards. The Tholian is also a much nicer casting that is currently being produced, much more like his plastic ships. So I would like to see if these are is available if anyone knows.
Posted by Chief cook & bottle washer at 8:22 PM 4 comments: Links to this post