One of my long time gaming goals has been to make a deluxe version of Avalon Hill's Advanced Civilization similar to my treatment of Victory in the Pacific and LiftOff!. I received the original Civilization as a Christmas present back in the early 1980's, and then got the western expansion board and commodity cards through the General. 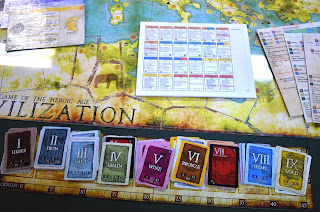 Civilization has always been one of my favorite games, though I rarely get to play it due to time constraints. Over the years I have often been tempted to sign up for it at Origins, but the thought of a nine hour game until early in the morning lost its appeal years ago. Usually when we play it now it is over several weeks of game nights. (It helps to have a dedicated game room so the game can be left up.) 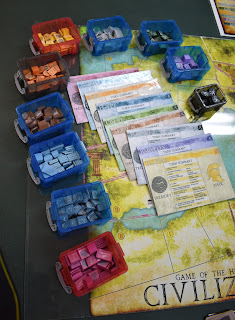 I knew I wanted a larger board in something other than day glow 1980's colors, and larger cards in better quality than the cheap punch-out paper civilization cards of the original game and the small commodity cards. I also wanted the board to be one piece rather than a original mounted board with the paper western expansion add-on.

As I began to start the design process I discovered a thread of posts on Board Game Geek by Evan Derrick on his redesigned Civilization project. Not only was he almost finished with it, but he is an actual artist/graphic designer. So rather than reinvent the wheel, so to speak, I made use of his excellent work. (You can find them on Board Game Geek in the Advanced Civilization files.) The only changes I made were to resize the Civilization cards to tarot-size rather than poker-size, and to enlarge his board to match the size of my other updated games. 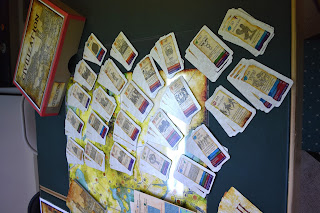 My game group has really enjoyed playing Civilization; many of my game group's younger players for the first time. This past years we've had it out a number of times - more than we've played it over the past 20 years.